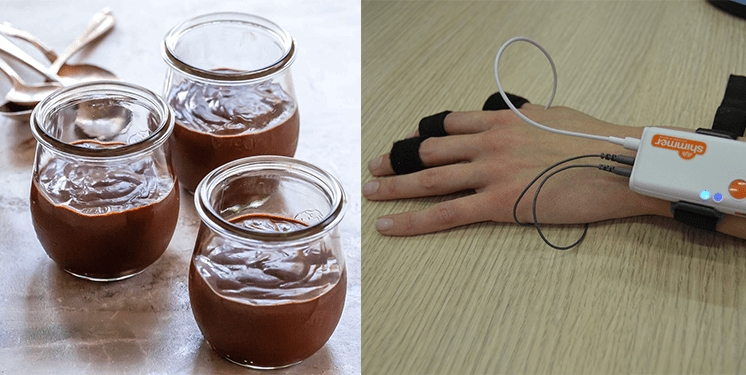 Through a neurosensory study consumer preferences and taste perception of a cocoa product with different sucrose concentrations were investigated.

The evaluation sessions took place in the sensory laboratories of CREA-Center for Research in Food and Nutrition in Rome. Twenty-eight volunteers participated in the study. The procedure used was based on quantitative methods, such as a questionnaire and on physiological measurements by detecting biofeedback signals such as Galvanic Skin Response (GSR), which is influenced by the participant's state of arousal, and Blood Volume Pulse (BVP), to obtain the subject's Heart Rate (HR), as indicator of emotional valence.

The experiment took place on two consecutive days, each with different instructions. On both days, participants' physiological and self-reported responses were elicited as they tasted a chocolate product supplemented with cocoa powder and different levels of sucrose to elicit variation in flavor intensity.

In the conscious responses, the perception of astringency has a turning point at levels 2 and 3 where the sucrose level is neither the highest nor the lowest.

Regarding the physiological responses, it was interesting to understand the extent to which HR is related to liking declared in questionnaires. It has been demonstrated that sucrose level 3 is the one with a positive relationship between liking ratings and heart rate. From a business point of view, level 3 could be considered the optimal level to produce a product because it satisfies consumers' hedonic needs both at conscious as well at unconscious level.

The research, conducted by the BrainSigns team in collaboration with the Center for Research in Food and Nutrition (CREA), has been published in the journal Foods on July 2, 2021.