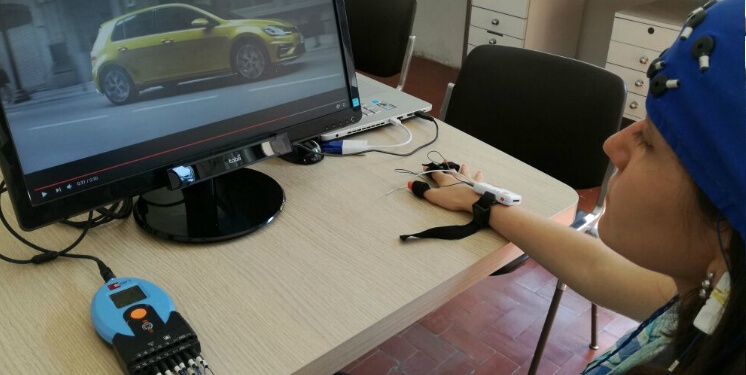 Measuring the effectiveness of a TV commercial through neuromarketing.

Advertising is one of the most important aspects in the world of marketing and, if studied in the right way, it can really make a difference in terms of visibility of a company. Ads must be created to attract the attention of the consumer – with an attractive storytelling – and arouse emotion, in order to increase brand recognition.

The story must be unique, appealing and clear; the storytelling is the heart and therefore the important aspect of any video, it must engage, create empathy and arouse emotions. Furthermore the presence of elements which may be unexplained but immediately associated with the brand, is fundamental, because our mind quickly decodes associations rather than rational reasoning.

Making a commercial, which typically takes a very short time, is an art to be declined with these parameters. It is not always simple, but a neuromarketing test is very useful to verify that this happens, avoiding a waste of money.

Creative agencies often produce one or more versions of a single commercial and offer them to companies, but we now know that, beyond the creative idea itself, even the smallest hint can be perceived by the consumer in a more or less constructive way for effective storytelling, good association with the brand and effective emotional involvement.

We show you one of the commercials analyzed by BrainSigns at the beginning of its activity in this field, to understand what a neuromarketing test can do.

This is the advertising of an online insurance company, interested in assessing the effectiveness of two versions of commercials of 30 seconds each: a first version aired with obvious communication difficulties and a second one improved and tested to be sure of the effectiveness of the changes made.

The company has decided to investigate this issue taking advantage of neuromarketing techniques, pursuing the following goals:

The instinctive perception of test subjects has been evaluated by BrainSigns with the following technologies:

and a short final interview.

Through this test it was possible to give the go-ahead to the second version of the commercial that contained only little but important changes: an introductory speaker and the continuous presence of the logo.

Thanks to these very little changes, the participants were finally able to better understand the commercial and in particular the “Offer”; the second version in fact obtained systematically higher scores for the index of interest and emotion.

Small differences can improve the whole perception of television advertising.

After highlighting the best moments of the advertising, based on the insights of neuromarketing collected after testing the two versions of the 30-second commercial, it was possible to provide the customer with some ideas on how to successfully optimize the reduction of the commercial.

When the 15-second commercial was aired, there was a 17% increase in the average number of requests received on the company’s website within 60 minutes following the broadcast of the commercial.

This case history of neuromarketing is described in more detail here.